We provide solutions to all your transportation needs.

Our selection of decorative rock will give your landscape or building project a polished, professional look.

Your career in truck driving is just up the road

For over five decades, the Potterfield name has been synonymous with trucking. In 2009, Ren Potterfield Trucking celebrated 50 years.

The firm began with one truck when Ren Potterfield returned from the service. Always a planner, he had a new truck, road ready, waiting for him at Jeff Trussell Chevrolet on May 19, 1959, when he got out of the service. Pete Paris, who later became the founder of Pete Paris Chevrolet, was the salesman. In 2008, before Paris' death, he told his friend and neighbor, Judy Potterfield, who had been the bookkeeper for Trussell in 1959, that he remembered the amount Ren paid for the truck and that he had made the comment, 'That boy will never be able to pay for that truck!"

The 1959 truck cost $5,562 total and the Potterfields proudly show the original invoice today. The company began as Central Trucking, Inc. and then in 1963 Ren was a partner in Lomax & Potterfield. In 1970, the company became Rennolds Potterfield Trucking.

The fleet now includes over 63 trailers and 23 trucks, plus a truck fondly referred to as "Little Dumpy" which is used for residential hauling of gravel, sand and mulch. The company continues to update equipment as they continue to grow.

The family-run business continues under the helm of Ren and Judy's son, Phillip, who began driving for the company in 1978. Just as Phillip used to help Ren, Ren now helps Phillip. But there's no doubt who's the senior Potterfield when Ren comes to the shop. He jokingly laughs, "I plan to show up with the whip just as long as I can crack it."

In addition to doubling the size of the fleet since 1983, the support staff has increased as well. Judy retired in 1993 when the company purchased computers, but she remains as treasurer of the corporation and is a regular at the office. The office staff is also responsible for sales of a large offering of on-site decorative rock, sand and mulch.

Through the years, the Potterfields had the foresight to diversify and this has been key to their success. "We have tried to stay diversified. We are always looking for opportunities to grow our business. A successful business has to be willing to change and grow with the times. We have to be open to new ideas." Phillip said. "I am always looking ahead." Just as the business changed from hauling lime and fertilizer to automotive parts, the business has moved its attention now to specialty business such as tanks and hazardous material.

Trucking companies have been affected by government regulations. "Challenges include Environmental Protection Agency and Department of Natural Resources regulations and emissions standards. With the new administrations, we really don't know what kind of emissions taxes we may be faced with. We have already seen big challenges in getting equipment to run efficiently while meeting the new emissions standards," Phillip said.

Phillip learned an important lesson from his father, one taught to him by his father, C.F. Potterfield, also a trucker who hauled lime and fertilizer to area farmers. Ren said that he owes much of his success to a good banker, Raymond Noel of Monroe City Bank, now owned by UMB. C.F. told Ren to always let the banker know what is happening in your business. "As bad as you hate to talk to him or as hard as it may be, always let the banker know where you stand," his dad advised. "Don't let him have to find you."

Ren remembers one particularly hard winter when he went into the bank every month to report to Mr. Noel. He had plenty of work but had to wait until spring for payment, and lived on borrowed money, and wasn't able to make a truck payment for the entire winter.

Ren also said he instilled the importance of paying bills on time, and he still oversees the office from time to time to make sure that this practice is done.

The company has a large, modern building designed to meet future needs. But Ren remembers servicing his truck on the ground in all kinds of weather to renting a tin shed from Morgan Brothers, which he shared with his brother, G.C. Potterfield, the late founder of G.C. Potterfield Trucking. He also had a block building on Highways 24 & 36 which adjoins the present-day 11,000-square foot complex at 404 Highway 24 & 36. The current building was completed in 1988 and was built by E. Eugene Sandifer Building and Leasing Co. of Quincy. 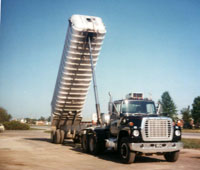 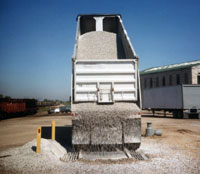